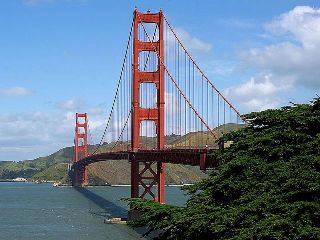 The first Spanish missionaries arrived in California in the 1700s, but California didn’t become a U.S. territory until 1847, as part of the treaty ending the Mexican-American War. Shortly thereafter, the discovery of gold at Sutter’s Mill in 1848 inspired a wave of settlers to head to the west coast in search of fortune. In 1850 California became the 31st state, and is now the third-largest state behind Alaska and Texas. With millions of acres of farmland, California leads the U.S. in agricultural production. The state is also home to famous cultural institutions and national parks including Hollywood, Disneyland, Yosemite National Park, Alcatraz, Angel Island and the Golden Gate Bridge.

Nickname(s): The Golden State; The Land of Milk and Honey; The El Dorado State; The Grape State

In 2017, there were 2,199 overdose deaths involving opioids in California—a rate of 5.3 deaths per 100,000 persons, which is lower than the national rate of 14.6 deaths per 100,000 persons. The main driver of drug overdose deaths were those involving prescription opioids with 1,169 deaths in 2017. However, the greatest increase in opioid deaths was seen in cases involving synthetic opioids (mainly fentanyl): a more than twofold increase from 229 to 536 deaths over the past 2-years. Deaths involving heroin also increased in the same period: from 593 in 2012 to 715 deaths in 2017.

Drug arrests have increased in many counties

In 2014 California recorded 19,711 marijuana arrests. This does not include the unknown number of Californians that were cited for non-criminal possession infractions.

What Are The Laws On Marijuana In California?

California marijuana laws changed drastically with Proposition 215 and the decriminalization of possession of less than 1 ounce. Possessing for personal use, as long as it’s less than 1 ounce, is only an infraction with no possible jail time involved. However, possession with intent to sell, possession or sale of more than 28 grams, and non-medical cultivation of marijuana are still serious crimes in California that often carry prison sentences.

Substance Use In California

• Alcohol use disorder was more prevalent than other types of substance use disorders. Six percent of Californians reported meeting the criteria for dependence on alcohol, compared to 3% for illicit drugs.
• Substance use disorders were most prevalent among young adults 18 to 25, occurring at nearly twice the state average rate.
• Use of alcohol and other drugs often begins in adolescence. By 11th grade, more than half of California
students have used alcohol and almost 40% have used marijuana.
• Alcohol accounted for more nonfatal emergency department visits than all other drug diagnoses combined.
• The number of heroin-related emergency department visits in California more than tripled between 2006 and 2017.
• California is undertaking a major effort to expand and improve its SUD services in Medi-Cal through the
Drug Medi-Cal Organized Delivery System (DMC-ODS) pilot program.

Substance use disorders (SUDs) occur when repeated use of alcohol and/or other drugs causes significant problems, such as failure to meet major responsibilities at work, school, or home; health problems; and or disability. Frequent, long-term use of substances can result in physical changes in the brain that may increase the likelihood of compulsive and destructive behaviors, and make it more difficult for people to recover, even when they are ready to quit.
Like other chronic diseases, SUDs can be prevented, treated, and managed. The chronic nature of addiction means that relapse is a continuing risk. However, treatment and support help people to recover from the effects of SUDs.

Behavioral therapy, which seeks to identify and help change potentially
self-destructive or unhealthy behaviors, can benefit people with a wide range of disorders. For some substances, including alcohol and opioids, behavioral therapy is best combined with medications that
can manage withdrawal, reduce craving, and decrease the physical “reward” from substance use. Peer support is another highly valued component of SUD recovery. Note that the term substance use disorder replaced the terms substance dependency, substance addiction, and substance abuse disorder in the diagnostic lexicon beginning in 2014. Both old and new terms are
used in this publication based on the diagnostic categories in use for data collection.

Treatment for substance use disorders is comprised of multiple service components. Some of these, which may be provided in outpatient or inpatient settings, include the following:
Behavioral Therapies
Motivational enhancement therapy helps people resolve their ambivalence about engaging in treatment
and stopping drug use, in order to evoke internally motivated change.

Cognitive-behavioral therapy teaches skills to identify and change problem behaviors and address other
life challenges that may influence the use of substances.

Recovery support services are nonclinical services that are used with treatment to support individuals in their recovery goals. These services are often provided by peers or others who are already in recovery.

Levels of Care for Substance Use Disorder

The American Society for Addiction Medicine has defined levels of substance use disorder treatment, ranging from early intervention to address risky use of substances, to medically managed intensive inpatient services to treat severe withdrawal symptoms.

Substance Use Disorder Treatment Centers and Programs in California :

Nearly half of California’s substance use disorder treatment facilities
had programs tailored for clients diagnosed with co-occurring
mental health disorders and nearly 40% had programs for criminal
justice clients.